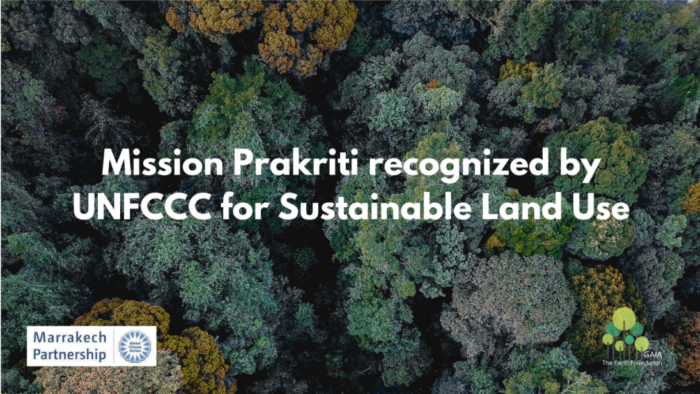 Mission Prakriti is globally recognised by the United Nations Framework Convention on Climate Change (UNFCCC) through the Marrakech partnership for our work around sustainable land use. As a partner, we help lower emissions and increase resilience against climate impacts in India.

The Marrakech Partnership for Global Climate Action was instituted by the UNFCCC as part of COP 22 to operationalise the goals of the Paris Agreement. Its main objective is to strengthen collaboration between governments and key stakeholders to immediately lower emissions and increase resilience against climate impacts.

In the run up to COP 26 this year, organisations from various countries participate to achieve ground level action across nine major themes ranging from Climate Finance, to Sustainable Land Use. The Global Partners will present their unique local challenges and action taken on these broad themes at the United Nations Climate Change Conference (UNFCCC COP 26), scheduled to take place between 1-12 November 2021, in Glasgow, UK.

Mission Prakriti goes beyond sustainability – it is towards Regeneration. We are looking at regenerating the ecology, reviving economic prospects of livelihood for farmers and establishing social equalities for rural communities in India. Mission Prakriti is a contemporary model which aligns conservation efforts towards the ecology with the economic development of unprivileged communities in India. In just a year since inception, our projects span over 5000 acres in Madhya Pradesh, Karnataka, Rajasthan and Maharashtra, where we handhold farmers and local communities in restoring their unproductive lands and in generating value from forest produce.

Through this partnership, we aim to represent India’s unique set of challenges and opportunities associated with land use change, at a global level while implementing viable solutions for Climate Adaptation and Mitigation at the local level. Through our efforts, we help enable environmental, economic and social system transformation, promoting higher ambition of all stakeholders to collectively strive for the 1.5 °C temperature goal and a carbon-neutral, resilient world. 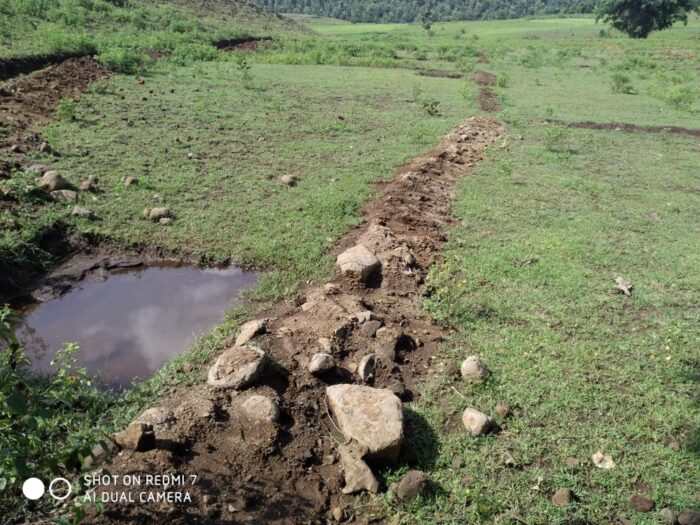 India’s diverse geography includes a number of forest reserves and green belts. These are inhabited by several tribes that not only make a livelihood out of these greens but also nurture them. However, the lives of people living in the small belt of the Kanha forest reserve have been under a lot of stress as the land has become barren over many decades.

The years of commercial farming and deforestation not only depleted the soil but also impacted the livelihoods of the tribal Gond and Baiga communities.

Enter GAIA – the Earth Foundation, whose social reforestation initiative Mission Prakriti has been helping these farmers and improving their livelihoods for over three years now.

“Mission Prakriti works on a socio-ecological model, wherein we are not looking at just the environmental part of the forestation but are also looking at how it is going to solve other social problems,” says Gayatri Chauhan, Founder of GAIA – The Earth Foundation and Mission Prakriti

The initiative is driven by focusing on social forestry, which helps in solving two critical issues: climate change and social inequities that people in underserved communities face.

Through Mission Prakriti, GAIA – The Earth Foundation aims to restore water ecosystems and protect the vast biodiversity in India.

With the pandemic affecting livelihood, especially the farmers, Prakriti’s goal is to not only reverse the ill-effects of deforestation and urbanisation but also address a multitude of ecological challenges without hurting any livelihood prospects for local communities.

At present, more than 2,000 acres of barren land are in the process of being cultivated by more than 1,000 farmers across Madhya Pradesh, Karnataka, and Rajasthan into green forests.

The first phase of the initiative was started in Madhya Pradesh when a local NGO working with over 50 farmer families from the Gond and Baiga tribal communities in the Narmada Valley area approached GAIA – The Earth Foundation. The NGO was providing education to these farmers’ children.

“But they noticed that families were facing a lot of difficulties; they were getting poorer by the day as the land was becoming barren,” Gayatri says.

These 500 acres of land were a part of the Kanha Forest Reserve, but became barren over the years due to commercialisation and deforestation.

This belt was made worse due to mono-cropping that was continuously practised by the farmers. This became a major environmental and social concern.

So, Mission Prakriti introduced the Narmada Valley Food Forest project to improve these lands and the situation of these farmers by working with the NGO, which has been working in these areas since 2010. In the first phase, the team has managed to replenish over 50 acres of land of the 500-acre project.

The farmers were the owners of the land, and Prakriti helped them procure plants that could grow, along with helping them sell their produce. They also provide them with a monthly salary for working in their own field, which was otherwise barren.

The forests are made with a simpler version of the Miyawaki technique, without increasing the cost or introducing foreign species. The species used are those that can adapt to the soil without needing any additional manure and those that can take care of each other – tubers, creepers, herbs, shrubs, fruit trees, nitrogen-fixing trees etc. The forest is lined with lemon trees, which act as a natural fence.

“We are trying to create an ecosystem that can continue to flourish on its own after a couple of years of care,” Gayatri says.

The organisation is also trying to sell the produce – mango, jamun, lemon, turmeric, among others – to urban consumers to increase the demand for natural, forest-grown produce.

An important factor that aids the sustainability of Mission Prakriti is the vetivers. These vetivers are planted in empty spaces. They go deep into the soil and fix the nitrogen, which, in turn, makes the soil extremely fertile.

Gayatri shares that plants with vetivers around them grow 1.5X to 2X more than those without vetivers. These vetivers also have a strong carbon sequestration potential.

Mission Prakriti’s work so far claims to have generated about wages of Rs 50,000 per acre per annum. In addition, through the forests, it sequesters about 15-20 kilograms of carbon per square metre. (Carbon sequestration is the process of capturing and storing atmospheric carbon dioxide, reducing the quantity in the air).

“We have also been able to create a carbon offset programme for corporates, especially in the manufacturing sector for those who have huge carbon reduction targets. They can incorporate energy-efficient measures in their own operations, or they do some other forestation to offset their carbon,”

Like the NVFF projects, Mission Prakriti is also working on other forests in India – Piplantri Food Forest in Rajasthan (100 acres in phase 1), NavSahyog (1 acre), and CCD Food Forests (50 acres) in Karnataka.

Mission Prakriti is globally recognised by the United Nations Framework Convention on Climate Change (UNFCCC) through the Marrakech Partnership for the work done around sustainable land use.

“Through the partnership, we help enable environmental, economic and social system transformation, promoting higher ambition of all stakeholders to collectively strive for the 1.5 °C temperature goal and a climate-neutral and resilient world,” Gayatri says.

Challenges and the road ahead

While the initiative has been running successfully, funding was a major challenge, as convincing the investors about building an ecosystem that would take three years to grow was difficult, Gayatri shares. However, some corporates are donating their CSR funds to the cause (names not disclosed).

“The amount we need is about Rs 5 lakh per acre per annum, with support for about three years,” Gayatri says.

Through the initiative, we want to create a socially inclusive rural India by improving the farmer income by at least 3X , tackling social inequities, and enriching the lives of rural communities through the restoration of barren and unproductive lands.

“It may not be a commercial project that we have to really scale because all of them have different climatic conditions and the farmers have different problems. But, at the same time, the forests are trying to solve a similar problem for the environment and the local communities,” Gayatri says.

Anchored on a regenerative social forestry model that adopts a holistic, social, and indigenous approach to rapid afforestation, this unique carbon offsetting program presents a multitude of benefits to participating companies. They get to not only offset their carbon but also engage in improving the livelihoods and social wellbeing of the underprivileged communities and thereby amplifying their social return on investment.

Carbon Offset is a valuable accounting tool for companies to address climate change and help them balance their emission scales. One carbon offset symbolizes the reduction of one metric ton of carbon dioxide or its equivalent in other greenhouse gases. The global Voluntary Carbon Offsets market size for 2020 was $247.9 million and is projected to reach $514.7 million by 2027. Owing to the numerous social and environmental benefits, Afforestation and Reforestation(A/R) offset transactions are the most popular Voluntary Carbon Market (VCM) offsets among Corporations eying net-zero carbon commitments.

Carbon sequestration through afforestation is the long-term removal and capture of carbon dioxide from the atmosphere to slow or reverse atmospheric CO2 pollution and mitigate global warming. Over and above carbon sequestration, regenerative social forestry has a holistic social and environmental impact that spans restoration of ecological balance, regeneration and conservation of biodiversity, social heritage protection, and livelihood creation for those most impacted by climate change.

Forty percent of India’s poor live on the periphery of forests and are dependent on firewood, non-timber forest products, and livestock grazing. Due to this massive pressure on forest reserves to sustain their livelihood, communities have been indulging in monocropping practices, which have resulted in deforestation and increasing barren lands. Mission Prakriti is set to convert 5000 acres of barren land into food forests using the Regenerative Social Forestry model impacting thousands of farmers and their families.

Losing forests means losing the best nature-based solution to climate change. They have the potential to capture nearly twice as much if we plant more trees, use climate-smart practices to manage our forests, and take other actions. Not just forests, trees in metropolitan areas and small towns are responsible for capturing and storing carbon emissions.